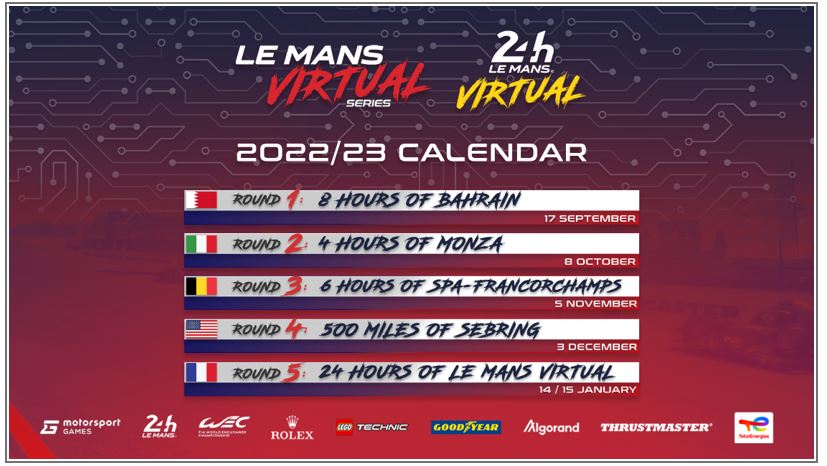 The five-round series has a US $250,000 prize fund at stake and more flexible regulations for pro drivers

MIAMI, June 10, 2022 (GLOBE NEWSWIRE) -- Le Mans Virtual Series, a joint venture between Motorsport Games Inc. (NASDAQ: MSGM) and the Automobile Club de l’Ouest (ACO), returns this September with more of the elite, endurance esports competition, which has attracted world motor racing champions, captured global attention and received plaudits from teams, drivers and fans alike. The announcement was made today at the official ACO annual press conference ahead of the 90th running of the 24 Hours of Le Mans.

Similar to the 2021/22 series, all five rounds of the coming series will be held online on the rFactor2 platform, including the 24 Hours of Le Mans Virtual, the climax of the premier endurance esports championship. This format allows teams to compete virtually on simulators located all around the world for a total prize fund of US $250,000. For an exciting preview, click HERE to view a trailer for Le Mans Virtual Series 2022.

To allow more flexibility within professional drivers’ schedules – now fully restored after the disruption of the global COVID-19 pandemic – a change has been made to the driver requirements. Teams must enter one professional driver in at least one regular round of the series (i.e., Rounds 1-4), instead of being required to drive for the full season.

The 2022/23 calendar features some of the world’s most famous and recognizable racetracks across three continents, which will challenge drivers from the real and sim worlds and thrill the millions of esports enthusiasts around the globe. New for 2022 is the season-opening 8 Hours of Bahrain, a more modern classic which fits in comfortably with the historic and legendary status of Monza, Spa, Sebring and of course, the most iconic venue of them all, Le Mans.

Pierre Fillon, President of the ACO, commented: “We are very pleased to have supported and followed the success of the Le Mans Virtual Series to date with, as its highlight, the 24 Hours of Le Mans Virtual. The link between real-life motorsport and esports is an essential element for our manufacturers and teams, and we believe it has an important role to play in attracting a new, younger audience both on and off track. We all look forward to another excellent season of esports competition.”

CEO of Le Mans Virtual Series, Gérard Neveu, said: “Last year’s Le Mans Virtual Series was extremely successful and we strive to improve each year. The audience figures and returns we saw in 2021-22 go a long way towards recognizing the support of our impressive portfolio of partners, the collaboration of elite manufacturers and the commitment of the best sim racing teams, including our current champions, Team Redline. We are confident that we will continue to attract champions from all different categories of motorsport and sim racing and that we can produce another exciting and professional esports series for the massive worldwide gaming and spectator audiences to enjoy.”

The vision for the virtual series remains to be as prestigious and recognizable as the real-world FIA World Endurance Championship, which includes the 24 Hours of Le Mans as its cornerstone event. The esports series will continue to use rFactor 2 as its platform, which is focused on the sim racing audience and provides a more authentic racing experience. Le Mans Virtual Series’ focus on increased race and strategy analysis and professional broadcasts of the races is expected to further boost fan interest and engagement. As in previous years, FIA-licensed drivers and sim racing experts compete together in the Le Mans Virtual Series in either LMP or GTE models. More details on the entry list for the Le Mans Virtual Series races, as well as when and where to watch the races, will be revealed at the beginning of September 2022.

About Le Mans Virtual Series:
Le Mans Virtual Series is a global, elite esports series made up of five rounds which bring together endurance racing and sim racing’ top teams to compete online on some of the world’s most famous racetracks. International FIA-licensed real-world drivers are teamed up with leading esports protagonists to take on endurance classics for a total prize fund of US $250,000, culminating in the prestigious 24 Hours of Le Mans Virtual. The Le Mans Virtual Series is a joint venture between leading racing game developer, publisher and esports ecosystem provider of official motorsport racing series throughout the world, Motorsport Games Inc., and the Automobile Club de l’Ouest (ACO) – the creator and organizer of the world-famous 24 Hours of Le Mans and promoter of the FIA World Endurance Championship (FIA WEC). www.lemansvirtual.com

About Motorsport Games:
Motorsport Games Inc., a majority-controlled subsidiary of Motorsport Network, LLC, is a leading racing game developer, publisher and esports ecosystem provider of official motorsport racing series throughout the world. Combining innovative and engaging video games with exciting esports competitions and content for racing fans and gamers, Motorsport Games strives to make the joy of racing accessible to everyone. The Company is the officially licensed video game developer and publisher for iconic motorsport racing series across PC, PlayStation, Xbox, Nintendo Switch and mobile, including NASCAR, INDYCAR, 24 Hours of Le Mans, rFactor 2, KartKraft and the British Touring Car Championship (“BTCC”). Motorsport Games is an award-winning esports partner of choice for 24 Hours of Le Mans, Formula E, BTCC, the FIA World Rallycross Championship and the eNASCAR Heat Pro League, among others. Motorsport Games is building a virtual racing ecosystem where each product drives excitement, every esports event is an adventure and every story inspires.

Website and Social Media Disclosure:
Investors and others should note that the Company announces material financial information to our investors using our investor relations website (ir.motorsportgames.com), SEC filings, press releases, public conference calls and webcasts. We use these channels, as well as social media and blogs, to communicate with our investors and the public about our company and our products. It is possible that the information we post on our websites, social media and blogs could be deemed to be material information. Therefore, we encourage investors, the media and others interested in our company to review the information we post on the websites, social media channels and blogs, including the following (which list we will update from time to time on our investor relations website):

A photo accompanying this announcement is available at https://www.globenewswire.com/NewsRoom/AttachmentNg/dbfe3e04-d6ef-48a7-aebf-028e6186a3ad