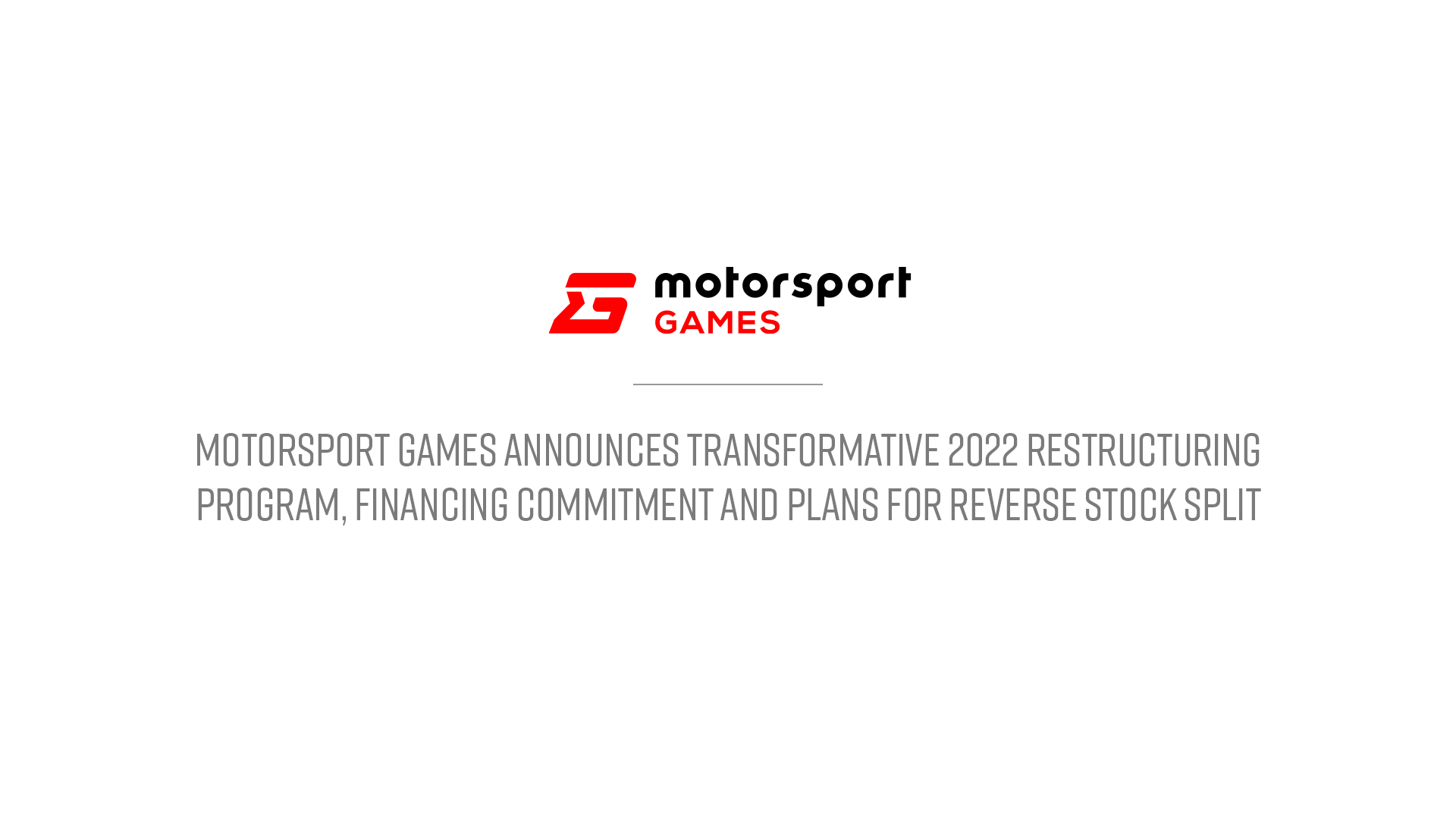 In an effort to re-gain compliance with NASDAQ’s continued listing standards, the Company also announced its plans to effect a 1-for-10 reverse stock split during the fourth quarter of 2022, following stockholder approval. Motorsport Network agreed to exercise its combined 94% voting power to support the reverse stock split at a special meeting expected to be held shortly.

Dmitry Kozko, the Company’s CEO, stated, "Today’s announcement represents an important, necessary, and logical next step forward for Motorsport Games. The financing commitment and the launch of the new restructuring program represent our plans to optimize our business for the future and create a more optimal business structure that is designed to achieve success in terms of long-term profitability. The 2022 Restructuring Program, which we are implementing immediately, is expected to create a stronger global business operating model, enhance cost efficiency and improve profit margins to drive growth in operating income and Adjusted EBITDA. With the increased liquidity, and a more efficient and streamlined business, we are taking steps to becoming a stronger, more financially sound organization, while being in a better position to take on opportunities within the gaming industry and continuing to deliver for our key stakeholders and, most importantly, our deeply dedicated racing fans. That said, we recognize that we have additional work to do in terms of reinforcing our liquidity for the long-term and managing our business in these volatile markets."

The 2022 Restructuring Program is designed to reduce the Company’s marketing, general and administrative expenses, improve the Company’s profit and Adjusted EBITDA and maximize efficiency, cash flow and liquidity.

The 2022 Restructuring Program includes right-sizing the organization and operating with more efficient workflows and processes. The primary components of the organizational restructuring involve consolidating certain functions; reducing layers of management, where appropriate, to increase accountability and effectiveness; and streamlining support functions to reflect the new organizational structure. The leaner organizational structure is also expected to improve communication flow and cross-functional collaboration, leveraging the more efficient business processes. In addition, given the ongoing uncertain economic environment and the potential effect that it could have on net sales, this action will also provide the Company with additional flexibility.

In connection with implementing the 2022 Restructuring Program, the Company expects to recognize during 2022 approximately $0.1 million to $0.3 million of total pre-tax restructuring and related charges, consisting primarily of employee-related costs, such as severance, retention and other contractual termination benefits. The Company expects that substantially all of these restructuring charges will be paid in cash during 2022, with the balance, if any, expected to be paid in 2023. The amounts and timing of all estimates are subject to change until finalized and may vary materially based on various factors. See “Forward-Looking Statements” below.

The agreement reached with Motorsport Network will provide the Company with $3 million in cash which the Company plans to use for general corporate purposes and working capital. As a result of such cash funding, the Company has on hand approximately $4.5 million of cash. The Company continues to work with its financial advisors on longer-term solutions to its liquidity needs.

These forward-looking statements include, but are not limited to, statements concerning:

(i) the Company’s plans to secure the $3 million cash advance as contemplated by the Support Agreement, to use the proceeds thereof for general corporate purposes and working capital and to reinforce its liquidity for the long-term and managing its business in these volatile markets;

(ii) the Company’s plans to implement the 2022 Restructuring Program and the expected benefits therefrom;

(iii) the Company’s expectation that it will substantially complete the employee-related actions by the end of September 2022;

(iv) the Company’s expectations regarding the amount and timing of the charges and payments related to the 2022 Restructuring Program;

All forward-looking statements involve significant risks and uncertainties that could cause actual results to differ materially from those expressed or implied in the forward-looking statements, many of which are generally outside the control of Motorsport Games and are difficult to predict. Examples of such risks and uncertainties include, but are not limited to:

(i) difficulties, delays or the inability of the Company to use the proceeds thereof as intended and/or in reinforcing its liquidity for the long-term and managing its business in these volatile markets, such as due to tightening credit and equity markets, less than anticipated consumer acceptance of the Company’s games and events and/or recessionary factors in the broader economy that causes consumers to alter their purchasing habits in ways that the Company did not predict;

(ii) difficulties, delays or the inability of the Company to successfully complete the 2022 Restructuring Program, in whole or in part, which could result in less than expected operating and financial benefits from such actions;

(iii) delays in completing the 2022 Restructuring Program, which could reduce the benefits realized from such activities;

(vi) difficulties, delays, unanticipated costs or the Company’s inability to consummate the reverse stock split on the expected terms and conditions or timeline, as well as future decreases in the price of the Company’s Class A common stock whether due to, among other things, the announcement of the reverse stock split, the Company’s inability to make its Class A common stock more attractive to a broader range of institutional or other investors or an inability to increase the stock price in an amount sufficient to satisfy compliance with the NASDAQ’s minimum closing bid price requirement for continued listing.

Additional factors that could cause actual results to differ materially from those expressed or implied in the forward-looking statements can be found in Motorsport Games’ filings with the Securities and Exchange Commission (the “SEC”), including its Annual Report on Form 10-K for the fiscal year ended December 31, 2021, its Quarterly Reports on Form 10-Q filed with the SEC during 2022, as well as in its subsequent filings with the SEC. Motorsport Games anticipates that subsequent events and developments may cause its plans, intentions and expectations to change. Motorsport Games assumes no obligation, and it specifically disclaims any intention or obligation, to update any forward-looking statements, whether as a result of new information, future events or otherwise, except as expressly required by law. Forward-looking statements speak only as of the date they are made and should not be relied upon as representing Motorsport Games’ plans and expectations as of any subsequent date. Additionally, the business and financial materials and any other statement or disclosure on, or made available through, Motorsport Games’ website or other websites referenced or linked to this press release shall not be incorporated by reference into this press release.

Motorsport Games, a Motorsport Network company, is a leading racing game developer, publisher and esports ecosystem provider of official motorsport racing series throughout the world. Combining innovative and engaging video games with exciting esports competitions and content for racing fans and gamers, Motorsport Games strives to make the joy of racing accessible to everyone. The Company is the officially licensed video game developer and publisher for iconic motorsport racing series across PC, PlayStation, Xbox, Nintendo Switch and mobile, including NASCAR, INDYCAR, 24 Hours of Le Mans and the British Touring Car Championship (“BTCC”), as well as the industry leading rFactor 2 and KartKraft simulations. RFactor 2 also serves as the official sim racing platform of Formula E, while also powering Formula 1™ centers through a partnership with Kindred Concepts. Motorsport Games is an award-winning esports partner of choice for 24 Hours of Le Mans, Formula E, BTCC, the FIA World Rallycross Championship and the eNASCAR Heat Pro League, among others. Motorsport Games is building a virtual racing ecosystem where each product drives excitement, every esports event is an adventure and every story inspires.

A photo accompanying this announcement is available at https://www.globenewswire.com/NewsRoom/AttachmentNg/487487f3-650b-473a-bc3d-2d253c11f4be