Nascar Rivals, Motorsport Games’ Official Game of the 2022 Season, to Launch on October 14 for Nintendo Switch 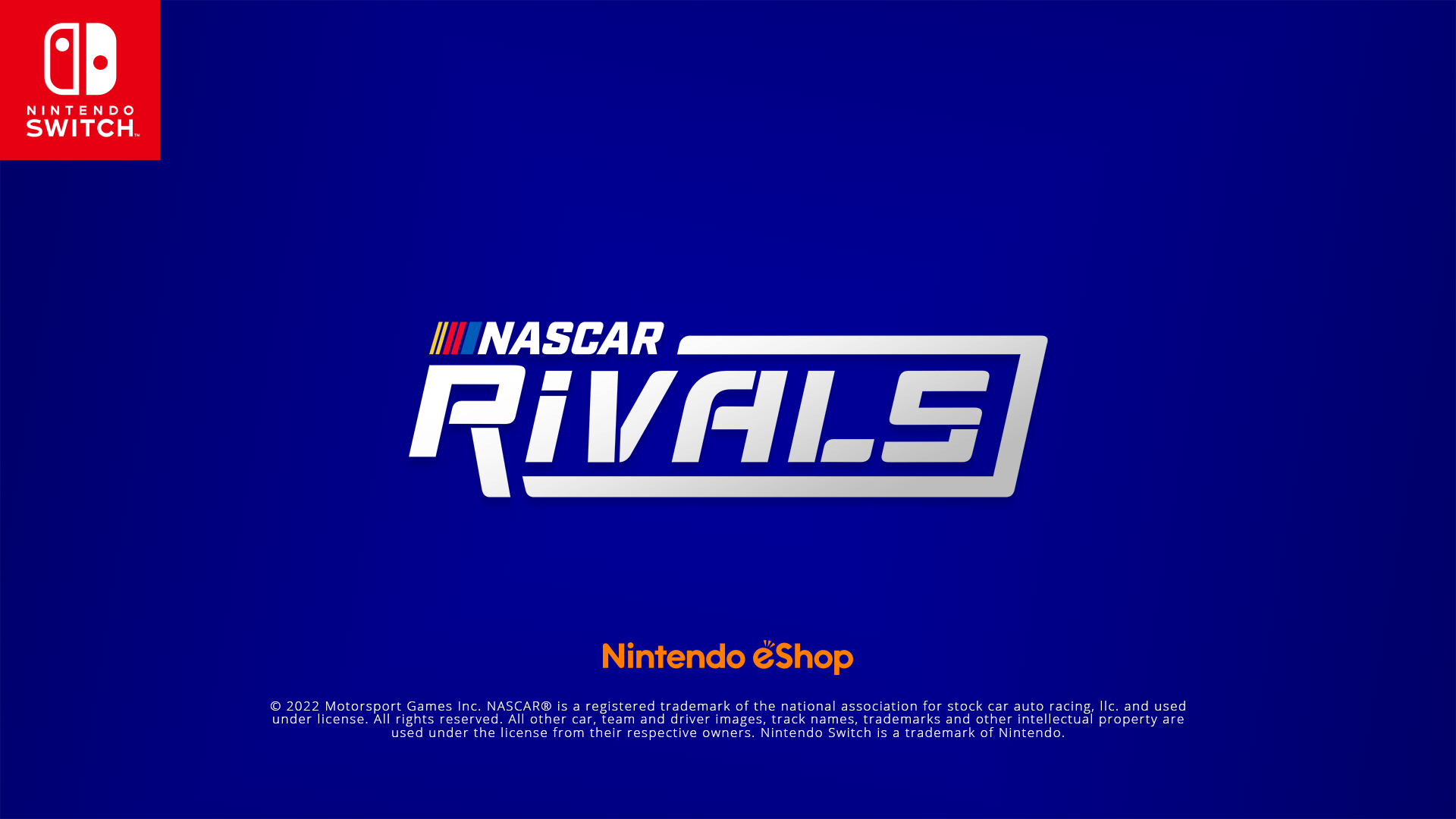 MIAMI, Aug. 17, 2022 (GLOBE NEWSWIRE) -- Motorsport Games Inc. (NASDAQ: MSGM) (“Motorsport Games”), a leading racing game developer, publisher and esports ecosystem provider of official motorsport racing series throughout the world, announces today its official video game of the 2022 season, NASCAR Rivals. This newest addition to the officially licensed NASCAR video game franchise will put the fun and intensity of the NASCAR Cup Series right into the hands of users everywhere with the Nintendo Switch console and will include new features that elevate players’ driving experience. NASCAR Rivals, prior to launching on October 14, 2022, will be available for pre-order beginning August 24, 2022 across leading retailers and the Nintendo eShop ($49.99). A link to the trailer can be found here.

“NASCAR Rivals is Motorsport Games’ latest racing experience that meets fans where they are, giving real-life drivers and NASCAR fans alike the ability to take it on the go,” said Dmitry Kozko, CEO of Motorsport Games. “As we continue to work alongside NASCAR to grow its gaming franchise, we’re excited to give players the opportunity to out-do themselves on the track wherever they are thanks to the Switch’s portability.”

Players have the opportunity to compete and race in a variety of different modes in NASCAR Rivals, with something for everyone. ‘Race Now’ will allow players to select any driver/team and race at any track on the 2022 NASCAR Cup Series circuit. ‘Career Mode’ gives players the chance to create their own legacy in the sport by either joining an existing team or creating one of their own, customizing their driver in the process. ‘Challenges’ will put players into scenarios inspired by real-life on-track events to see if they have what it takes to complete the challenge.

NASCAR Rivals is all about finding rivals on the track or on the go with several ‘Multiplayer’ functions presenting users with plenty of options for challenging others on the track. Players are able to race against their friends using the Nintendo Switch Joy Cons in ‘Split Screen’ mode or race online against 15 other players anywhere in the world with the online ‘Multiplayer’ feature. New to the game is the ‘Local Multiplayer’ feature in which players are able to race against up to seven other players on a local network.

The latest Nintendo Switch game from Motorsport Games will offer drivers the opportunity to create custom and unique schemes utilizing the enhanced ‘Paint Booth,’ which gives fans a host of customization options. Unique driver avatars can also be created with a variety of appearances, sponsor logos and more.

NASCAR Rivals was developed by Motorsport Games to ensure fans are able to embrace the intensity and thrill of NASCAR to the fullest degree with heightened accessibility through Nintendo’s portable Switch console. Fans now have the ability to take NASCAR with them and compete against their rivals anywhere they go, be that at the racetrack, at home and everywhere in between.

About Motorsport Games:
Motorsport Games, a Motorsport Network company, is a leading racing game developer, publisher and esports ecosystem provider of official motorsport racing series throughout the world. Combining innovative and engaging video games with exciting esports competitions and content for racing fans and gamers, Motorsport Games strives to make the joy of racing accessible to everyone. The Company is the officially licensed video game developer and publisher for iconic motorsport racing series across PC, PlayStation, Xbox, Nintendo Switch and mobile, including NASCAR, INDYCAR, 24 Hours of Le Mans and the British Touring Car Championship (“BTCC”), as well as the industry leading rFactor 2 and KartKraft simulations. RFactor 2 also serves as the official sim racing platform of Formula E. Motorsport Games is an award-winning esports partner of choice for 24 Hours of Le Mans, Formula E, BTCC, the FIA World Rallycross Championship and the eNASCAR Heat Pro League, among others. Motorsport Games is building a virtual racing ecosystem where each product drives excitement, every esports event is an adventure and every story inspires.

Certain statements in this press release which are not historical facts are forward-looking statements within the meaning of Section 27A of the Securities Act of 1933, as amended, and Section 21E of the Securities Exchange Act of 1934, as amended, and are provided pursuant to the safe harbor provisions of the Private Securities Litigation Reform Act of 1995. Any statements in this press release that are not statements of historical fact may be deemed forward-looking statements. Words such as “continue,” “will,” “may,” “could,” “should,” “expect,” “expected,” “plans,” “intend,” “anticipate,” “believe,” “estimate,” “predict,” “potential,” and similar expressions are intended to identify such forward-looking statements. These forward-looking statements include, but are not limited to, statements concerning: (i) the release of the NASCAR Rivals game on October 14, 2022 and its availability for pre-order beginning August 24, 2022 across leading retailers and the Nintendo eShop; (ii) the expectation that the new features of the NASCAR Rivals game will elevate players’ driving experience; (iii) the expectation that the NASCAR Rivals game will enable the fans will have the ability to take NASCAR with them and compete against their rivals anywhere they go, be that at the racetrack, at home and everywhere in between; and (iv) the expected future impact of new or planned products, features and/or offerings and the timing of launching such products, features and/and offerings. All forward-looking statements involve significant risks and uncertainties that could cause actual results to differ materially from those expressed or implied in the forward-looking statements, many of which are generally outside the control of Motorsport Games and are difficult to predict. Examples of such risks and uncertainties include, but are not limited to: difficulties, delays in or unanticipated events that may impact the timing and scope of new product launches and product features and playability, such those that may arise from (i) difficulties or delays in using its product development personnel in Russia due to the Russia invasion of Ukraine and the related sanctions and/or more restrictive sanctions rendering transacting in the region more difficult or costly or military actions in other parts of the world that may strain global labor and supply chain resources and contribute to even higher inflation levels; (ii) difficulties and/or delays arising out of any resurgence of the ongoing and prolonged COVID-19 pandemic; (iii) difficulties, delays or less than expected results in achieving the Company’s growth plans, strategies, objectives and expectations, such as due to (A) a slower than anticipated economic recovery; (B) the Company’s inability, in whole or in part, to continue to execute its business strategies and plans, such as due to less than anticipated customer acceptance of the Company’s new game titles, the Company’s experiencing difficulties or the inability to launch its games as planned, less than anticipated performance of the games impacting customer acceptance and sales and/or greater than anticipated costs and expenses to develop and launch its games, including, without limitation, higher than expected labor costs and less than expected access to liquidity on terms acceptable to the Company, or at all, whether due to the Company’s continuing financial condition and/or difficulties or delays in obtaining additional debt and/or equity financing to meet its liquidity requirements financing; and/or (iv) adverse economic, market and geopolitical conditions that negatively impact industry trends, such as significant changes in the labor markets, an extended or higher than expected inflationary environment (such as the impact on consumer discretionary spending as a result of significant increases in energy and gas prices which have been increasing since early in 2020), a higher tax rate and interest rate environment impacting consumer discretionary spending. Factors other than those referred to above could also cause Motorsport Games’ results to differ materially from expected results. Additional examples of such risks and uncertainties include, but are not limited to: (i) Motorsport Games’ ability (or inability) to maintain existing, and to secure additional, licenses and other agreements with various racing series; (ii) Motorsport Games’ ability to successfully manage and integrate any joint ventures, acquisitions of businesses, solutions or technologies; (iii) unanticipated operating costs, transaction costs and actual or contingent liabilities; (iv) the ability to attract and retain qualified employees and key personnel; (v) adverse effects of increased competition; (vi) changes in consumer behavior, including as a result of general economic factors, such as increased inflation, higher energy prices and higher taxes and interest rates; (vii) Motorsport Games’ ability to protect its intellectual property; and/or (viii) local, industry and general business and economic conditions. Additional factors that could cause actual results to differ materially from those expressed or implied in the forward-looking statements can be found in Motorsport Games’ filings with the Securities and Exchange Commission (the “SEC”), including its Annual Report on Form 10-K for the fiscal year ended December 31, 2021, its Quarterly Reports on Form 10-Q filed with the SEC during 2022, as well as in its subsequent filings with the SEC. Motorsport Games anticipates that subsequent events and developments may cause its plans, intentions and expectations to change. Motorsport Games assumes no obligation, and it specifically disclaims any intention or obligation, to update any forward-looking statements, whether as a result of new information, future events or otherwise, except as expressly required by law. Forward-looking statements speak only as of the date they are made and should not be relied upon as representing Motorsport Games’ plans and expectations as of any subsequent date. Additionally, the business and financial materials and any other statement or disclosure on, or made available through, Motorsport Games’ website or other websites referenced or linked to this press release shall not be incorporated by reference into this press release.

A photo accompanying this announcement is available at https://www.globenewswire.com/NewsRoom/AttachmentNg/868ec582-72af-4be8-883e-9c24b636500e