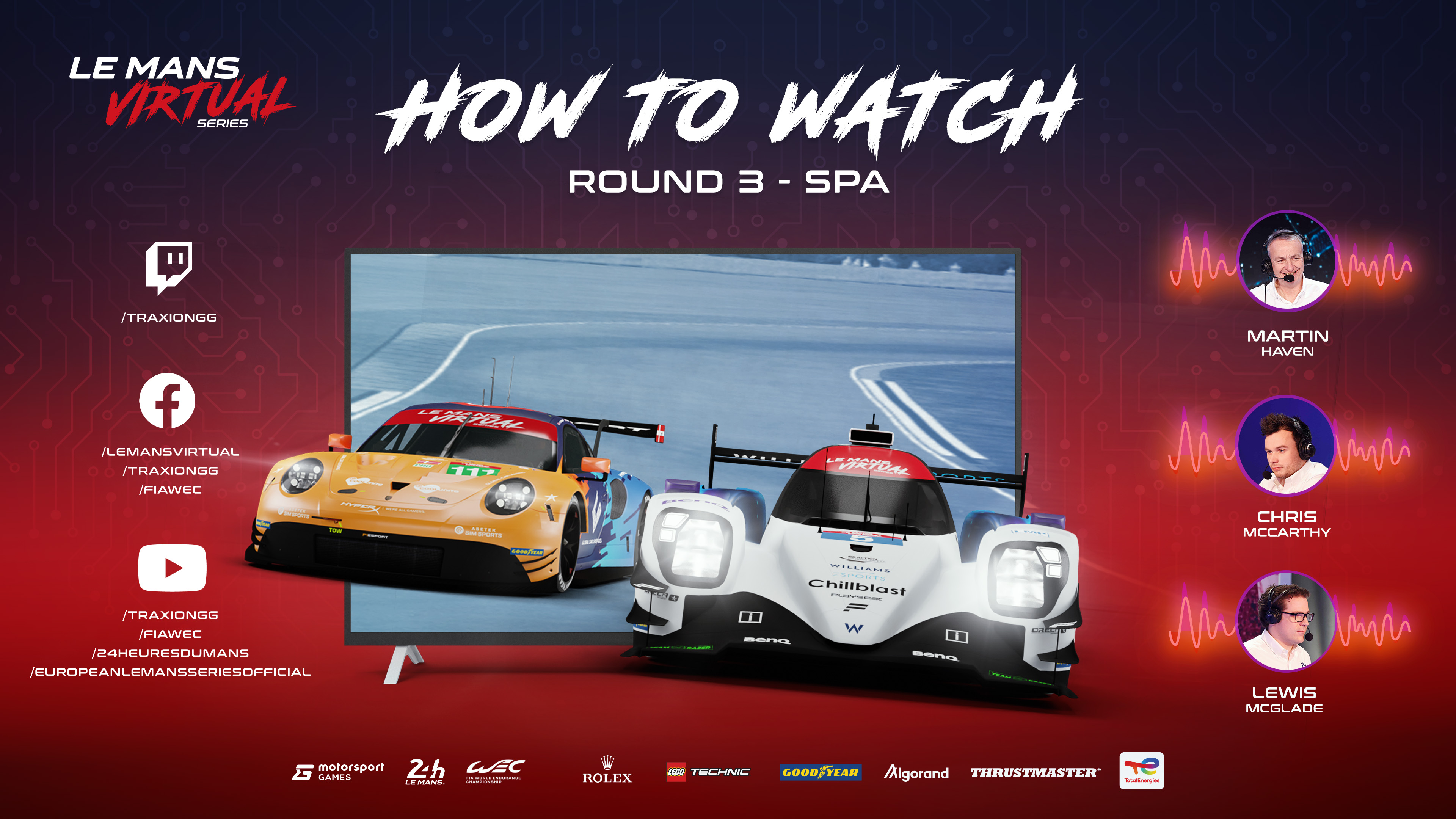 Entry List for Round 3 Revealed, along with how to watch all of the action

Two-time F1 World Champion Max Verstappen will compete in the #1 Team Redline LMP entry (Verstappen/Rietveld/Benecke) for the first time this season, and he will be joined by R8G Esports Team Owner and INDYCAR star Romain Grosjean who will be driving the #18 R8G Esports LMP car (Grosjean/Hemmingsen/Ozyildorim) on the increasingly-strong grid.

LMP Championship leaders Floyd Vanwall-Burst (Viscaal/Simončič/Pedersen) will be looking to stretch out its narrow 2-point advantage over Team Redline, while in the hotly-contested GTE category the Oracle Red Bull Racing team (Kasdorp/Siebel/Jordan) will be planning to put its disastrous Monza showing into the background and return its Porsche to its Bahrain-winning form. BMW Team Redline and SF Velas Esports (Ferrari) are close behind and all the manufacturer-led teams will have their eye on victory.

The race takes place on the rFactor 2 platform on the virtual, fast and technically challenging 4.35 mile/7km long Circuit de Spa-Francorchamps. Full, uninterrupted coverage will begin from 12:30 pm (GMT) on Saturday, November 5th. Expect some fireworks, hot track action and maybe some rain, a probability at Spa in the real world, whatever the season!

A total of 40 cars will battle it out in two different classes – 24 in LMP, with all competitors using an ORECA 07 LMP2 model, and 16 in GTE with teams having a choice of Ferrari, BMW, Porsche and Aston Martin Vantage models. Manufacturer support also comes to teams representing Alpine and Mercedes AMG.

Qualifying is on Friday, November 4th and all race action can be followed on the FIA WEC, Le Mans and TraxionGG’s YouTube channels, on twitch.tv/traxiongg, and on multiple social media channels.

About Le Mans Virtual Series
Le Mans Virtual Series is a global, elite esports series made up of five rounds which bring together endurance racing and sim racing’ top teams to compete on some of the world’s most famous racetracks. International FIA-licensed real-world drivers are teamed up with elite esports squads to take on endurance classics for a total prize fund of US$250,000, culminating in the prestigious 24 Hours of Le Mans Virtual. Le Mans Virtual Series is a joint venture between leading racing game developer, publisher and esports ecosystem provider of official motorsport racing series throughout the world, Motorsport Games, and the Automobile Club de l’Ouest (ACO) - the creator and organizer of the world-famous 24 Hours of Le Mans and promoter of the FIA World Endurance Championship (FIA WEC).

About Motorsport Games
Motorsport Games, a Motorsport Network company, is a leading racing game developer, publisher and esports ecosystem provider of official motorsport racing series throughout the world. Combining innovative and engaging video games with exciting esports competitions and content for racing fans and gamers, Motorsport Games strives to make the joy of racing accessible to everyone. The Company is the officially licensed video game developer and publisher for iconic motorsport racing series across PC, PlayStation, Xbox, Nintendo Switch and mobile, including NASCAR, INDYCAR, 24 Hours of Le Mans and the British Touring Car Championship (“BTCC”), as well as the industry leading rFactor 2 and KartKraft simulations. RFactor 2 also serves as the official sim racing platform of Formula E, while also powering Formula 1™ centers through a partnership with Kindred Concepts. Motorsport Games is an award-winning esports partner of choice for 24 Hours of Le Mans, Formula E, BTCC, the FIA World Rallycross Championship and the eNASCAR Heat Pro League, among others. Motorsport Games is building a virtual racing ecosystem where each product drives excitement, every esports event is an adventure and every story inspires.

A photo accompanying this announcement is available at https://www.globenewswire.com/NewsRoom/AttachmentNg/a7d98cb7-085b-488f-a275-53e0c9b2f58b